“This was given to me, because that was going to kill me,” entrepreneur Lee Janik told me.

“That” was the job of owning and running a construction company he started in Ohio in the mid-2000s.

“This” was the sacred experience of fly fishing, and ultimately building a multinational craft rod-making company. 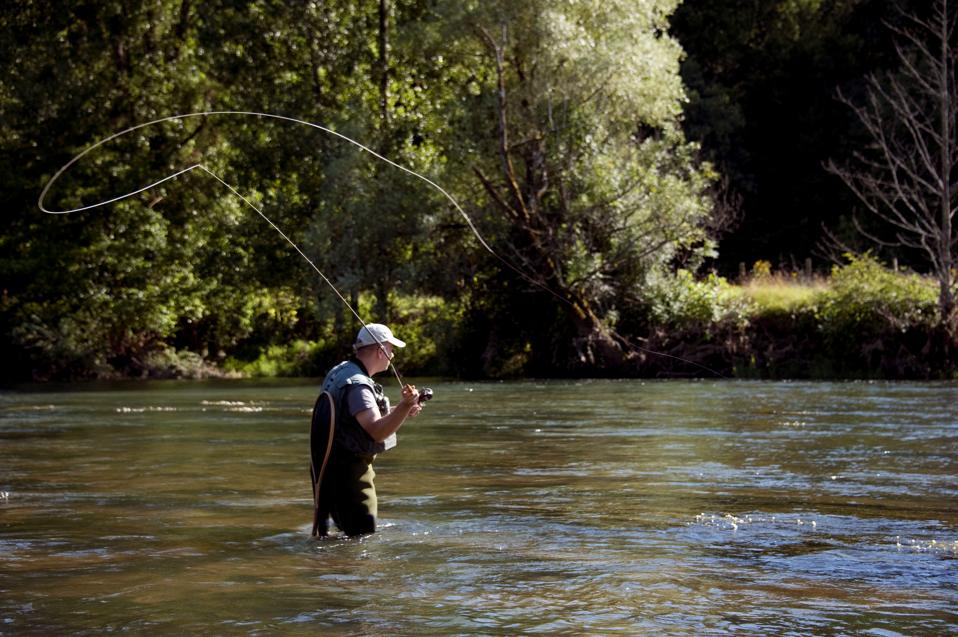 “It’s like going to church.” That’s how Janik describes fly fishing, his passion, which nursed him through the Great Recession as his commercial real estate development and construction company hung on for dear life.

The company survived, and ultimately thrived, but his therapeutic hobby grew into something more. At the moment, “this” has evolved into Clutch Fly Rods, the company Janik founded selling high-end fly rods that is fast becoming a disruptor in its space.

From Hobby to Side Hustle

How’d he get there?

In early 2012, Janik had grown weary of the 18-month, latest-and-greatest cycle of big-name fly fishing rod rollouts that he felt barely met the standard of greater, much less greatest. The difference mattered, because he was good enough at the sport to be sponsored and compete in casting for distance events in televised tournaments. Clearly, he excelled in the passion that was born the first time (you guessed it) he watched A River Runs Through It.

“I got frustrated and decided to create my own rod,” he said. “I did it for myself. I wasn’t starting a business.”

It wasn’t even a side-hustle at that point. He scrounged up the raw materials and found a small-time rod maker with ancient manufacturing equipment. Janik commissioned a “five-weight” rod (a versatile size) and a “nine-weight” rod (for saltwater fishing) with the features he found lacking in mainstream products.

Upon its completion, he grabbed the larger rod and headed to the Florida Keys, where he wasn’t the only one who enjoyed it. His buddy, who was also a professional guide, asked where he got the rod. Janik told him he made it, and, after doubting his ability to do so, the guide picked it up and casted it.

And right there, the “Oh!” moment occurred, that instant when the skilled angler can tell something is different. Something is better. The guide asked to hold onto the rod for a couple weeks, but it took Janik months to get it back because it started making the rounds through the Southeastern guide community.

What exactly is different and better about Clutch rods, by the way? Well, even after a two-hour interview and a couple pours of whiskey, I was only able to reach a limited understanding. But let’s say it’s encompassed in a phrase of Janik’s floating around the Clutch community that is reaching legendary status: “It’s f***ing physics!”

What Clutch does to apply physics favorably for the fly fisherman is a process called “splining.” As Janik described it, whether you’re rolling paper towels–or in this case, graphite–in a cylindrical fashion, eventually it comes to the end of the material, where the roll stops.

“There’s going to be a stopping point on the graphite where you know there’s a lap. So where that lap is, it creates a stiff spot,” said Janik. This stiffness where the spline exists often creates a glitch in the cast that the fisherman ends up fighting. Clutch locates and calibrates the spline on every rod, hence the “Oh!” moments their rods are inclined to inspire.

Everyone who knows fly fishing knows about the spline, but Janik says his company is the only one that finds and fixes it.

By the time the original rod got back to Janik, he had already converted the unheated space above his construction company’s offices into the first unofficial Clutch factory, where he spent every spare moment of that long Ohio winter with a propane heater blasting, pursuing his new, evolved hobby–creating craft fly rods.

By the end of 2012, the first public manifestation of Clutch–a website–went live. But Janik still didn’t consider it to be a business. He had a more than full-time gig running the construction and development company, but making rods and sharing them with others had become, as his wife, Tracy, put it, therapy.

And why should it have been anything else? The rate of Americans who fly fish has barely budged over the past decade, boasting a whopping 2.2% participation rate in 2016. Imagine, now, how small the market is for people willing to pay $800 or more just for the rod, not including a reel or line or tackle!

The Moment Where Everything Changed

But as the grind of the construction company continued to weigh on Janik, he began taking profit from his job and investing it in his love. Then, as word of mouth continued to compound Clutch’s reputation throughout the fly fishing community, Janik had a moment in early 2016 that he describes as nothing short of an epiphany:

“I can do this,” he recalled telling himself. He could leave the company that had provided a very nice life for his family, but little more. And he could bootstrap a company that had yet to yield a dollar of profit.

But he wouldn’t just be leaving construction and financial stability. The Midwest, as you might expect, isn’t necessarily a fly fishing hotbed, especially for the saltwater rods for which Clutch was building a reputation.

That meant leaving construction for Clutch would also mean leaving Ohio. And family.

But his nuclear family of five was on board. Over a vacation, they made the long drive to Charleston, South Carolina, to explore housing and schooling options, returning to Ohio only briefly, before making the big move south in July 2016.

Janik’s biggest challenge now can be summed up in a word: compromise.

He confesses that he still struggles even uttering the words “big box outdoor store,” and that the younger version of himself may even be disgusted by the fact that Clutch rods can now be found there.

After all, it was his disgust with the compromises made by the big outdoor products companies that originally compelled him to create Clutch in the first place. But Janik acknowledges that his “me of 2013” has evolved, and his company has followed.

He’s allowed Clutch rods to be sold in big box stores. He’s created less-expensive versions of the rods to serve those of us out who couldn’t justify spending a grand on a starter kit. He’s toned down the exceptionalism that likely would’ve prohibited him from even explaining twining to an inexperienced angler (like me) in the first place! And there may be additional concessions (wince) the evolved Janik makes with his former self.

But at present, there are a few things that Janik says must remain constant:

But everybody’s “passionate” these days, right? Exactly how passionate?

Turning Down A Million Bucks

Not yet a year into the Clutch venture, Janik turned down a million-dollar offer for the company.  A million bucks. He estimates that it took him less than two seconds to respond to one of the largest companies in the industry.

“We were at our first trade show in Colorado and I’m thinking we hit the big time just because we’re here,” he says. “The guy who runs that company said, ‘Let’s take a walk. I like what you’re doing and think we’re aligned. I want to buy your company.’”

“That quick? Don’t you think that’s a little closed-minded?”

“Look,” Janik replied, “I love this so much that if your offer was good today and I crashed it tomorrow, I wouldn’t care.”

Of course, we’ve learned that passion alone can’t get the job done. It’s where our passion and our competence align that we can find the sweet spot–and enjoy our own “Oh!” moment.

Applying This Story to Your Story

But I’m curious, have you even given yourself that chance?

Poet David Whyte, in his classic The Heart Aroused: Poetry and the Preservation of the Soul in Corporate America, says, “The split between what is nourishing at work and what is agonizing is the very chasm from which our personal destiny emerges.”

What elements of your work are nourishing and life-giving? What elements are agonizing, or sapping life from you?

Your response may just shape your destiny.

Share | Tweet | Share | +1 | Buffer | print | email
Categories: Career, Forbes, Life Planning, Personal Finance
Disclosure of Material Connection: Some of the links in the post above are “affiliate links.” This means if you click on the link and purchase the item, I will receive an affiliate commission. Regardless, I only recommend products or services I use personally and believe will add value to my readers. I am disclosing this in accordance with the Federal Trade Commission’s 16 CFR, Part 255: “Guides Concerning the Use of Endorsements and Testimonials in Advertising.”